Our school uniform is a really important part of the history and heritage of Hunterhouse College.

It was designed for the new Hunterhouse College by Rossi Grimason, a designer who was a past pupil of Princess Gardens school and was to be made up by local firms from cloth produced in the United Kingdom.

Its unique colour – Saxe Blue – was made by combining the colours of the school uniforms of the parent schools, Princess Gardens and Ashleigh House, and was paired with Hunting Pink. 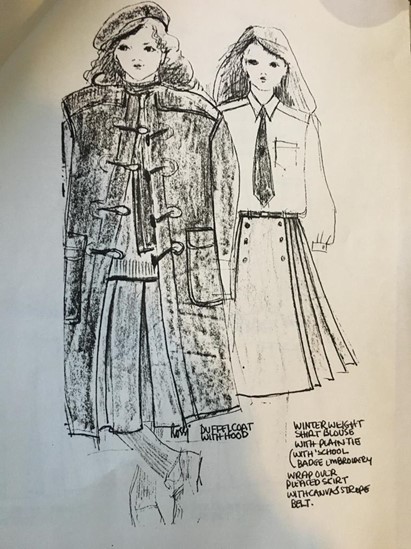 Much of the uniform remains as it was originally designed, although we replaced the duffel coat with a puffa jacket – a much more popular choice with current students!

The skirt has also evolved over the last few decades: 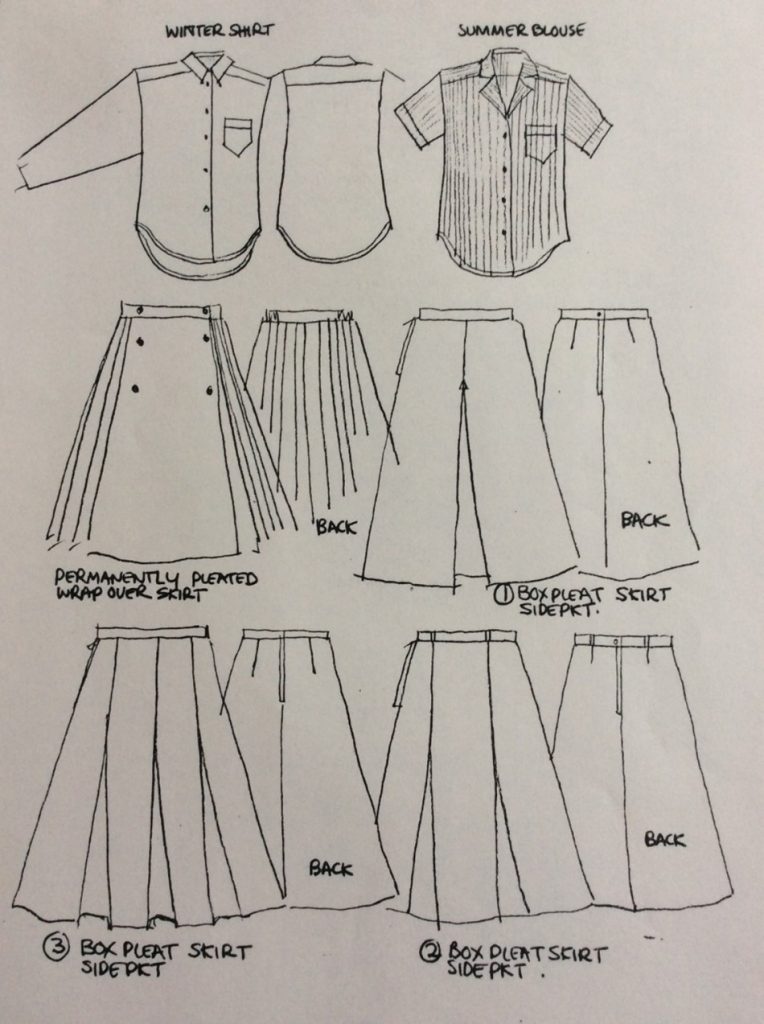 And the PE uniform has shaken off its 1980s styling:

The new uniform was summarised for parents and students in the following letter from May 1987:

‘A brand new school uniform is today making its first public appearance. Hunterhouse College, the voluntary grammar school for girls which will come into being on 1st August with the amalgamation of Ashleigh House School and Princess Gardens School, has chosen a distinctive and stylish combination of Saxe blue and Hunting pink.

The styles are based on designs by local designer and former pupil of Princess Gardens School, Rossi Grimason, and where possible have been made up by local firms from cloth produced in the United Kingdom.

The emphasis is on comfort, practicality and combining quality with value for money, hence the re-designing of the duffle coat in a new, easy to wear fabric in dark Saxe blue lined with the red. Two styles of blue skirt are on offer, worn with a blue and red canvas belt, and the blouse, made in the two basic colours to form small checks on a cream ground, is designed to be adapted to summer and winter wear, with or without a tie.

The blue ties sport the heraldic emblem of the new school, the curved and ribboned pilgrim’s horn.

The knitwear consists of a v-neck jumper witht the neck and cuffs banded in narrow red stripes and blue socks with red hooped tops. The blazer, too, has been re-designed in blue, with red and blue cording and a striking new pocket. This consists of the new device of the horn uniting the emblems of the two parent schools – the bottle green tree of Ashleigh on the red background and the tan lamp and book of Princess Gardens on the blue green ground. The motto Una Crescamus, (let us grow together), completes the pocket.

There is much excitement amongst pupils of both schools at the prospect of wearing their new uniform,’

We hope that each new group of students who enters Hunterhouse College continues to feel that sense of excitement at the prospect of wearing their new school uniform, becoming part of the Hunterhouse community and that they will wear our uniform with pride in the years to come.